Spotlight: Future Buildings Toward To Be Eco-Friendly 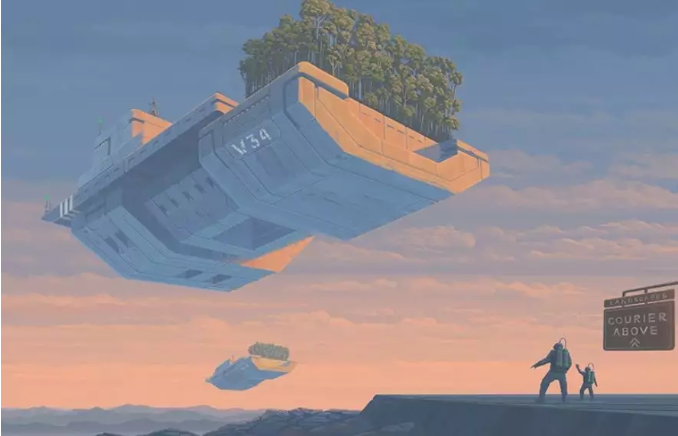 Think of the word building, and you may conjure up an image of many skyscrapers towering into the sky with a magnificent outside But, with the frequent appearance of environmental problems, the concept of a building is changing. To be future-ready, a building must be eco-friendly, energy-efficient, sustainable, flexible, safe, and reliable. Now let’s look at those buildings in 2019 shaping the future.

The project that proposes to re-freeze the arctic won the 2nd prize in an international design competition initiated by the ASA (the association of siamese architects).

Aiming at melting icebergs, this team designs a submarine architecture which measures 25 meters in diameter. It is intended to restore the polar ecosystem by re-freezing sea water that has melted into new “ice fields”. The system of the architecture, called “re-iceberg-isation”, will release what is referred to an “upnormal freezer” each month.

In a hexagonal shape, it will float in the sea and collect water to divide the fresh water and salt water. The top lid will close to keep the cold temperature after desalination. And within a month, a new hexagonal-shaped “ice baby” is released. As time goes on, this system will create as many freezing vessels as possible. Thanks to their regular hexagonal shape, they will insert themselves into the larger ice sheet for the best “re-iceberg-isation” effect.

As a changeable buoyancy floating housing unit, “flolony” consists of a mobile naval architecture piece equipped with autonomous energy and developed on geometry so that it can accommodate to any marine conditions and even the extreme ones. Its buoyancy is adjusted by compensation basins. The 36.5-meter-deep range of float-on and float-off enables it to keep floating on the water under both extreme and optimum marine conditions.

Controlled by systems, the upper part of the structure is always out of the water to guarantee the maximum supply of vital elements (light and water), which is conducive to the residential or productive metabolism.

In the simulator, the building applies a realistic social model. Each person pays the building cost of the colony according to the number of inhabitants, the costs for maintenance, services, crew and so on.

Its designer, Italian studio HOV, proposes a housing unit in a marine environment, in which a community of individuals could choose to live a short or long part of their lives on the open seas. Each unit is autonomous as to the basic living facilities. Without external supplies, it can work independently for periods from a few months to years based on its potential configurations and equipment.

Awarded an honourable mention in 2019 eVolo Skyscraper Competition, “Filtration” is a floating skyscraper developed by American architectural designer Honglin Li. It is envisioned to purify the seawater according to recycling the garbage in the infamous “Pacific garbage patch”.

This concept, especially its prefabricated waste-management and waste-to-energy megastructure, provides a reference for the solution to the global environmental and energy crisis.

The Filtration skyscraper contains “material recovery facilities (MRF)” and “water treatment plants (WTP)” to clean up the seas and offer green energy. These structures allow the power station to support itself while working to clean up the “floating garbage continent” in the north pacific gyre.

What’s next is the entry for Founder’s Memorial in Bay East Garden in Singapore. XTU architects base their proposal on the mangroves and banyans along the coastal regions of Singapore in honor of the legacy of the founders.

The memorial includes two parts: a viewing tower and a museum. The viewing tower soars above the horizon, lifted by 6 columns symbolizing the roots and canopy of a mangrove forest. They depict the six core values of Singapore: building a multiracial nation, boldness and diligence, resilience and adaptability, integrity and incorruptibility, humility and teamwork, and values enshrined in the National Pledge.

The museum is situated underground, wreathed with a large garden and water patio. The distinctive design creates a microclimate which insulates visitors from the city. It offers a chance to walk through the history of Singapore in the reflective ambiance. As seen from the outside, the museum blends into the surrounding scenery.

The vertical city contains water desalination system, energy storage solutions and integrated food production and farming, focusing on a healthier and more sustainable lifestyle. According to the architect Luca Curci, it conveys a new way of living. While combining a high-sustainability model for a dense population, the project aims to build a zero-energy city-building hybrid.

The building is perforated to support the circulation of air and light on each level. It is equipped with green areas and vertical garden. In a way, the vertical city rethinks the traditional concept of community and society and design meeting and social areas for community life in response.

“What if” is a purely hypothetical scenario, which describes lots of well-known sites in Rome. But, not limited to Rome, the project boldly re-imagined contemporary architecture from all corners of the world, where there are a series of fantastic scenes. For example, they place London Eye in Roman Forum and Pompidou Center in Piazza Navona in Rome. The transformative potential is shown in the reposition of contemporary elements in the totally irrelevant surroundings of Rome. A fancy mix of ancient architecture and modern design indulges visitors in pleasures without stop.

Apart from the distortion of reality, the project also communicates the message to the world that Italian capital can be a fertile breeding ground for innovation. Its powerful historical characteristics can also keep pace with the evolution of modern times through similar interventions.

Named as “Green Spaceship”, a new municipal library will be constructed by 3GATTI in Villaverde, Madrid. The idea behind the design is to excite tourists’ curiosity and establish a recognizable landmark in this area.

The library is divided into two storeys architecturally and conceptually. The ground floor is designed to be transparent and open for the purpose of accommodating the noise. The upper floor, with a floating monolithic volume, can contain all the quiet functions like quiet study zones.

As the real “spaceship” in the design, the upper floor has a concrete and brick base, sprayed with dark plaster and built with red tubes and a metallic net cladding structure. It supports the Virginia creeper vines planted on the roof; hence the library has seasonal changes in appearance.

Short of the technology of beams and columns, Iranian architecture lacks verticality. Although some cities has adopted the modern style and built some high-rise buildings, most towns still use the traditional architecture technology.

However, Iranian architect Mohammad Hassan Forouzanfar wants to make some changes. He decides to retain the historical identity while improving the local traditional architecture.

In his collection about “retrofuturism”, introduce the concepts of skyscrapers and surrealism into historical architecture. Imaginary skyscrapers in a vernacular style stand out in the middle of the desert, which seems a mirage.

The “high lines” pedestrian crossing is designed by Lissoni Architettura to be a new landmark within the urban fabric of New York. It’s not only to set up another elevated walkway but also to recreate a brand-new vision for this part of the city.

The bridge evolves like a living creature that continually changes shape by accommodating to the heights of the adjacent buildings. Like Spiderman’s web, the bridge is suspended from the surrounding buildings without hampering any activities below.

Walking on it, passers-by will find themselves walking among a varied and new landscape with the feeling of floating above the roads. The project only uses eco-friendly and recycled materials, which could reduce CO2 emissions and production cost.

10. Monuments of the Past | by Nick Stath

Australian architect and illustrator Nick Stath makes up a dystopian fairy tale happening in 100 years from now. There were no more natural elements on the future earth. What was left was a world that had similar landscapes to Mars, where parents had to describe what forests, mountains and lawns was once like.

Humans could only remember theses natural scenes by viewing the man-made landscapes on the massive structures in the sky. Therefore, they are named as “monuments of the past”.

The story has taken the second prize in Fairy Tales 2019 Architecture Storytelling Competition. It is inspired by climate changes and the fact that humans have taken the beauty of the nature for granted. The designer tries to use it to reveal a question how our life would be when natural resources were exhausted.

(All the pictures above are reprinted from ABBS.)

Those are the top 10 future buildings in 2019. There’s no doubt that since the environmental problems become increasingly severe, it influences how we think and act in the world of architecture. We all have the responsibility to make this world a better place for the next generation. Hope you enjoy today’s sharing. If you have any interesting designs that want to share with us, please feel free to contact AIMIR.